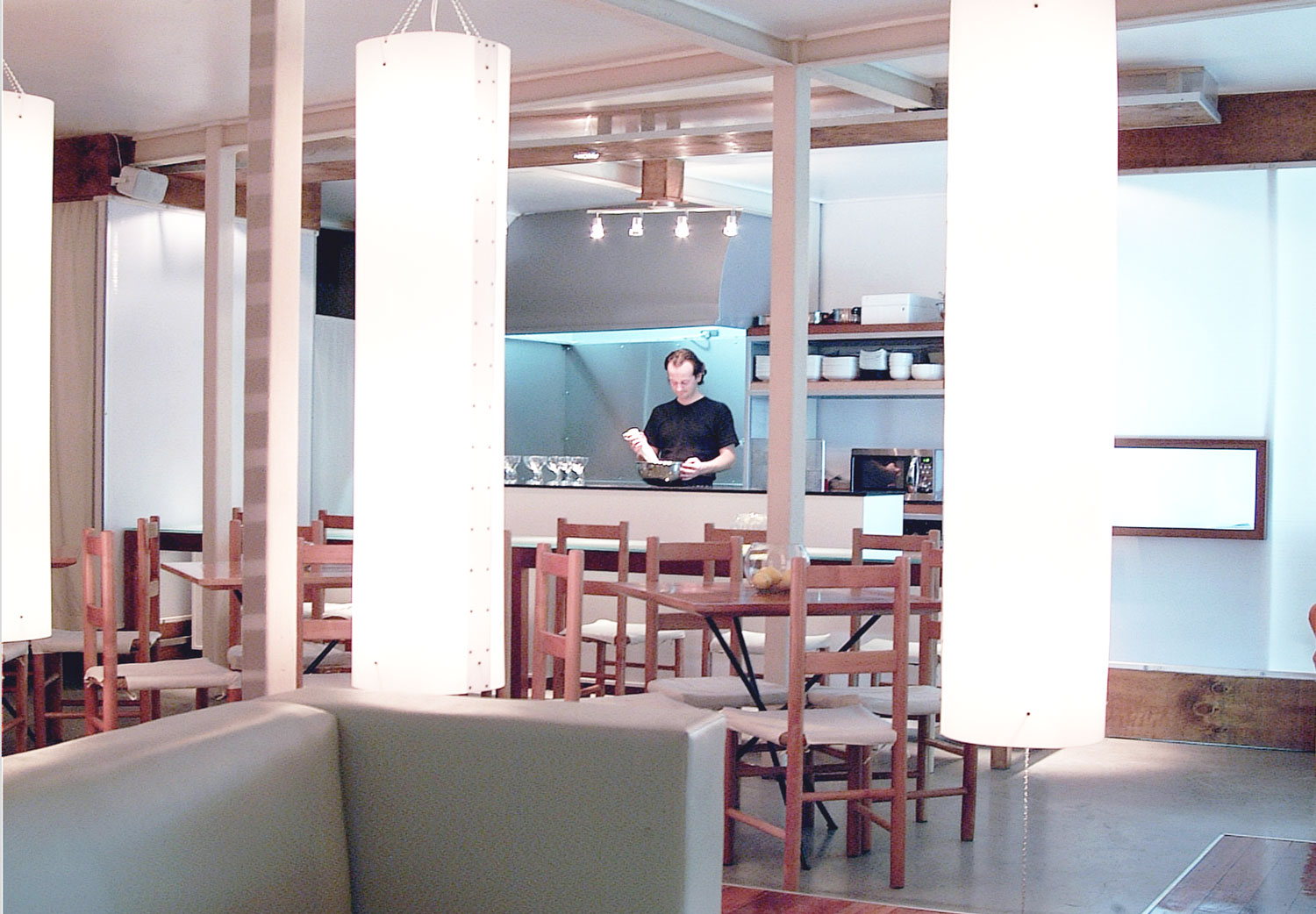 It consists of a proposal for a small restaurant with a contemporary and minimalist atmosphere. The physical space that we had to work were two places where coffee and a hairdressing salon used to be located. Its interiors were very partitioned in small rooms and had very little light.

The first design operation consisted of “releasing” the entire plant. To do this, we demolished all the existing walls, replacing their old wooden structure in very bad condition with a new metallic structure that reinforced the entire building.

This process of achieving a free plant allowed to recover a small patio that was almost hidden in the back and had no use. In this way, we have an orthogonal structure marked by a grid that was defined by the metal columns that marked a hard rhythm, “engineering like”.

On this scheme we proposed to incorporate a system that differs from the existing, then the orthogonal system, engineering, hard, static, we contrasted a proposal of oblique lines, which give a certain speed and continuity and which stresses the space giving depth.

It also mattered to us to contrast the image of the past represented by the building, another of modernity and present in terms of simplicity, and ethereal and efficient space. The noise of the street is contrasted with the backwater of the interior that culminates in the use of the back patio (we built a translucent roof).

We worked the concept of a singular unified and fluid space, with predominant white tones and touches of wood that give a certain sensation of tranquillity. We set out to emphasize the feeling of being in a simple and contemporary space.

Thus, walking by Aníbal Pinto street we see that on the facade of the whole property this “modern accident” occurs with a “citric green” accent. Upon entering we find ourselves on a wooden platform oriented obliquely inwards. On the side of the platform, a series of hanging cylindrical objects accompany a wooden platform on one side and a line of tables on the other. There are other oblique lines of the organization such as The chef’s open kitchen with a low bar and two white-translucent boxes that frame them. A screen – wooden filter that separates the bathrooms sector. There are also two “lounge” sectors, and a VIP area with a bigger table.

The open kitchen as a theatre presents a focus of attention that helps to organize the entire restaurant. The bar instead of being the traditional one of greater height than a table, here a central table made of wood and covered with glass. This table-bar acts as the first row of a theatre, and behind them, we placed the rows of tables located along with the wooden platform.

We worked the lighting concept to create this kitchen-theatre idea: we focus on lighting directed on the chef’s cooking Isla and on the table-bar in the first row. Opposing this lighting, the rest is always indirect light: dim light that illuminates the hanging cylinders, light flush with the floor coming out from under the wooden platform and the effect produced by the two “light boxes” that illuminate the open kitchen.

The bathroom package is resolved behind a wooden screen in a horizontal position.  At the centre of the screen, you find a hand made stone sink. The hardiness of the stone is contrasted with the polished chrome of a high-heel water tap.

The choice of materials was marked by simple solutions such as the floor in refined cement in sight and the recycling of the old existing wood in the floor to be reused in the platform.