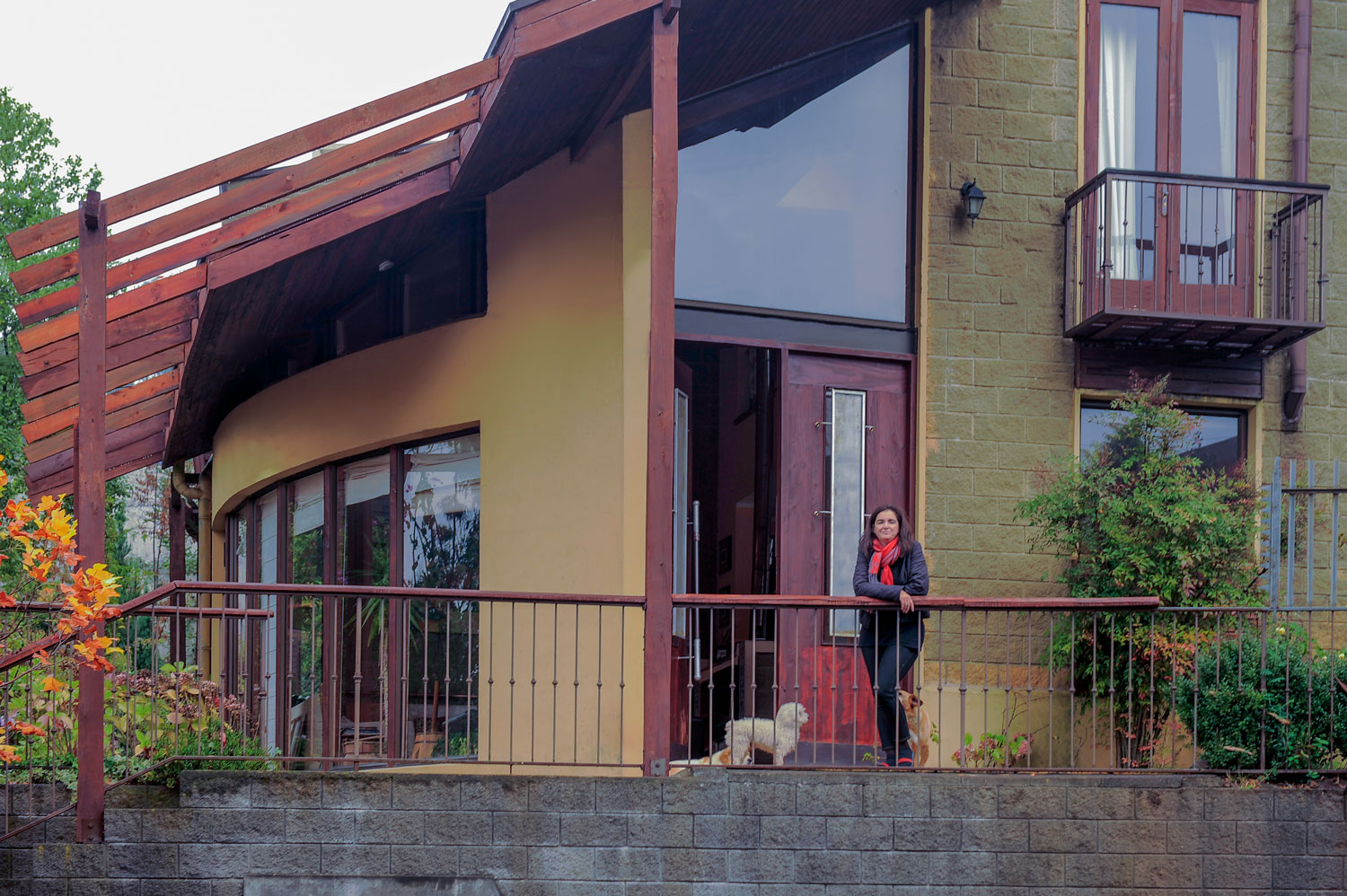 This house was built in 2000 on a wild terrain, on a hill in the Andalué neighbourhood of San Pedro de la Paz, near the city of Concepción.

The lot is a narrow and steep terrain, literally a slope. This gave very different characteristics to the elongated sides of the terrain. One that goes down the street, has views to the treetops of the lots that are below, and the other side, which has an immediate neighbour and a small public plaza that divide the área from a more urbanized sector.

We built the house in the high part of the lot, and we use a curve to créate a geometrical configuration of a split curve that runs along, following the solar rotation during the day and enjoying the great lateral views downhill.

The rich topography allowed to articulate the volumes both inside and outside, thus giving expression to the volumes and internal spatial richness. The access condition was not easy, so we decided to work along with the architecture and landscape as well. The entrance to the house becomes an event in itself, a ritual, so entering should not be direct or predictable. The house would gradually appear tangentially. Foreshortened and in stages as one went up through the interstice left by two walls that build the stairs. One wall forms the containment curve, and the other opens with the first steps toward the stars.

As we were concerned about the high humidity of Concepción, we decided to put a lot of emphasis on taking advantage of the natural sun. Thus the choice of material and shape configuration was naturally arising. The use of the stone block with great thermal properties was the best answer. On the other hand, we took advantage of the extension of the land to form along with geometry, which captures the largest surface of the day’s sun, accompanying the rotation of the sun and storing it. The curve of the house is a kind of screen that captures the morning and afternoon sun just like a large solar clock.

Where the curve ends, you enter the house through double wooden doors that were very high, and as you enter, you face the high and dramatic double height stone wall in the living room. This massive element gave a robust expression to the main space of the home, a sense of security and protection something that a single mother would treasure. On the base of this giant wall, we set up a concrete sofa, which alludes to the ancient medieval constructions. The curved side of the living room is a succession of windows that allow expanding the interior space towards the trees in the outside. A red wooden terrace acts as a mediator between the interior and the exterior through a gallery that follows the curved movement of the wall. Facing the window we climb three steps that locate us in the dining room and kitchen, which are completely open and expand to the living room.

Wood Volume: It is a rational volume for the technical installations. Built entirely of masonry and covered in wood and additional isolation. Here we located the bathrooms on both floors and the laundry. This volume has some extructions, which are not winnowing, they are objects that capture light and only ventilate the wet areas. This contrasts with the volume of stone but harmonizes with the residential scale of that side of the house, which is oriented towards a small square.

The volume of Glass-Metal: The metal and glass structure in the centre, is a transitional space for the circulation and stair and divides the house into two volumes, one of concrete and Stone, and the other a wooden one, of great warmth and nobility.

The volumes are internally related, giving rhythm and dynamics to the social relationship that takes place in this house. This was an important condition in domestic sociological dynamics. We thought that this was an opportunity to experiment with domestic conditions and internal spaces of crossed socio-spatial relationships, vertical, horizontal and oblique. In this way, this house became for us a land where we experiment with the complex programmatic relationships that are established in a home for a particular family.

Another premise that led us to this type of solution was that Lorena wanted to be able to watch her little son Sebastian from all the areas of the house, while he played in the living room. From her sleeping room upstairs, there is a small window that overlooks in many directions as a checkpoint to watch the child.

The study room in the second level can also participate in what happens in the lower but controlling the noise and concentration if someone needs a quiet mood.