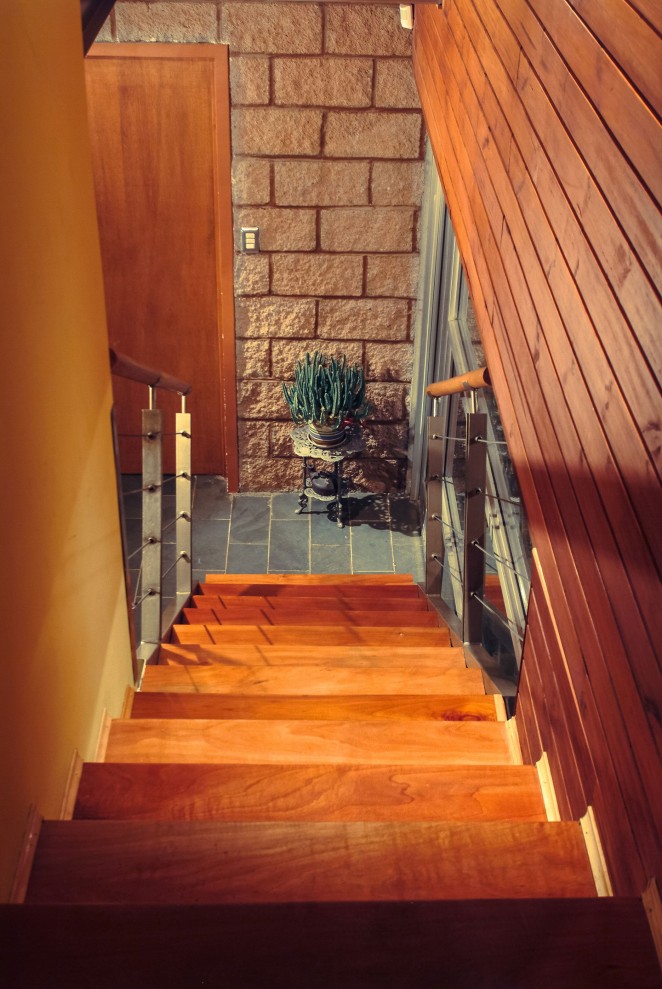 We handle two different scales within this project. The urban scale of the street scale, and the other one, the domestic scale. The urban scale is expressed in the access through the double-height space of the semi-roof. Also with the parasols that give an idea of “unique piece” and not “home”: break with the traditional iconography of “the house” and instead, one of a molar piece, one of continuity.

A domestic environment with a large outdoor area where the children could play, but also a domestic dwelling that allowed privacy, a rich interior family nucleus in the core.

The ellipse then arose from a floor plan, one that is isolated from neighbouring walls. Oriented to capture the sun’s entrance.

The ellipse is split into two volumes connected by a bridge element. This central element is built of glass and metal, both materials that contrast significantly with the stone and concrete of both circular volumes. The circular, in the manner of Jorge Luis Borges, as a representation of the eternal flow of life. In this perspective, we counterpose the immutable, which is reiterated as an invariable, with permanent change. The immutable is represented by the rite of every day, by the sunrise and the beginning of the day. And on the other hand, the variable, the permanent change is evident in that each day is different, where each “re-start” is, in fact, particular, has moved in time.

The concept represented by the pure geometric form: the circle. The accident as a detail or roughness that breaks into the pure form, which interacts with it creating a tension. The sum of abstractions (concepts or ideas) and accidents (or details or particularities) is a possible description of the complexity of life: the molar and the molecular.

We work the object-house at the Molar level; build the ellipsoidal cylinder house. As a pure three-dimensional object, the cylinder was split in two, with two different radii. Here began the volumetric logic of the ellipse: its curvatures have two radii. The cylinder partition produces two blocks. We have worked to individualize them and assigning different domestic activities to each one, but without losing the molar condition: If we look at the house from the front, the block on the right is destined to public areas and visits, while the one on the left contains the private dwelling. The public block on the right contains a double height living room, dining room, kitchen and service area on the first floor. On the second floor of this same block, we put a family room that overlooks to the first level and also a room for visitors.

The intimate block on the left has the bedrooms: on the first floor the parents’ bedroom, which controls the entrance to the house, the bathroom and on the second floor two rooms for children.

But this “built concept” that is the ellipsoidal cylinder is crossed by “detail or accident”.

The concept of the accident is applied to various scales and crystallizes in various objects: The accident on a general scale is represented by the transparent box, an intermediate object that connects the two pieces that are produced when “dislocating” the cylinder. This connector box produces transparency in the opaque-cylinder object. The connector is the one that defines the access and arms the upper bridge that connects the two volumes of the ellipse. The materiality of the connector is light, steel, wood and glass, and contrasts with the two main concrete blocks. This transparent box houses the arrival hall, the staircase and the bridge that floats in the entrance hall. Within it, one is always transcending. For example, when one enters, one directly confronts the inner courtyard as if entering to be thrown out. On the second level, the bridge that seems to float in the air, causes instability, as to accelerate the pace of passage to each of the curved volumes.

We use the wall as a delimiting and articulating argument. Also like limit or border that is in constant movement, a continuous and infinite edge interrupted only sometimes by a dislocation or penetration, alteration of its condition of the molar body.

The curved continuous edge, which constitutes the conceptual perimeter of the house is transgressed by

Two wall dislocations that leave interstitial fissures (light and sun inputs) and that allow the projection of the interior space outside the molar rim. This happens in the dining room, the living terrace, in the double bathroom and the bedroom on the second floor. They are projections that make the continuous edge more flexible, here habitable and allow to create interstices of light without losing the ellipse.

Two circular walls that fold together, when approaching tension occurs at the tangential point between the two. An indirect interstitial point is created, a disorienting point, surprisingly, the entrance. We use this strategy to define the end point of the search process to finally enter. The point of greatest tension between the two outer circular walls produces the fissure that becomes access. On this, dramatizing the tension between both walls, a concrete slab that defines the door. This tension in turn “presses and spills” the surface of the floor in steps.